Delegation can be a difficult topic to wrap your head around. I found it easiest to break up posts on the topic to help readers who are new to the pattern grasp the concepts a little better. First, I analyzed what delegation is in “What is Delegation – A Swift Developer’s Guide”. If you’re looking for the “what is it?” behind the “how does it work?”, I recommend giving that first article a read.

Once the terminology is unpacked and a high-level overview of delegation as a design pattern is understood, the next logical place to turn is to the question, “How does delegation work?”. That is the focus of this article.

For delegation to occur in software, you’d have a situation where one class (a delegator class) would give control or responsibility for some behavioral logic to another class called a delegate.

So how does one class delegate behavioral logic to another class? With iOS and Swift, the delegation design pattern is achieved by utilizing an abstraction layer called a protocol.

A protocol defines a blueprint of methods, properties, and other requirements that suit a particular task or piece of functionality.

I used the fancy term “abstraction layer” prior to the quote. What is that all about?

Protocols are an “abstraction”, because they do not provide implementation details in their declaration… Only function and property names. Like an outline, or as Apple puts it, a blueprint.

With a single blueprint, there can be many homes constructed. The fine details of their construction may differ, but in the end, houses of some similarity that satisfy the blueprint’s specifications are built.

So, too with a protocol: Many classes can be built that follow the protocol’s specifications. At the end of the day, the fine details of each class’ implementation (the stuff between the curly braces { ... }) may differ, but if they adopt the protocol, they’ll be similar in at least the fact that they provide the named behavior it specified.

Another analogy from the legal world is popular for describing protocols: Protocols are similar to contracts. It’s this contractual idea that actually makes the most sense to me when it comes to delegation.

While the person signing the contract probably gets something out of the deal, the focus in the analogy we’re making to protocols and the delegation pattern is on the person on the guarantee end.

That person, being guaranteed by the contract that certain terms will be executed by the person who signs the deal, is free to make decisions and take action based on that promise.

Stepping back from this description, we see three players involved:

As you can see, there are a few moving parts to delegation. Sometimes it helps to visualize the players involved in the strategy. I created the following diagram for an analysis I wrote on NSNotificationCenter vs Delegation, but I think it gets the point across for this blog entry as well: 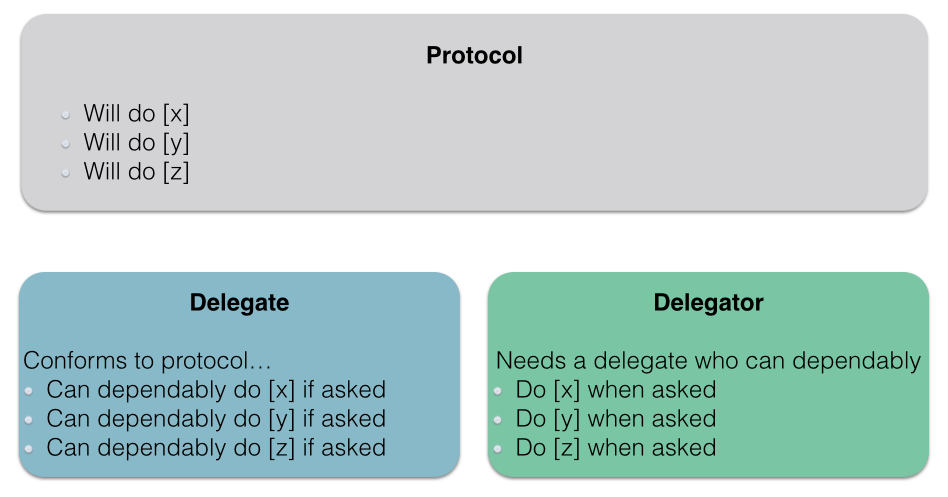 An example in code

Hopefully the explanation so far has provided some good groundwork to sort out how to accomplish the delegation design pattern in code. So how does it all get wired up?

Setting up the delegator

Setting up the delegate

When the delegator class gets initialized, a second step is often to immediately assign an instance of the class that’s adopted the delegate protocol to its delegate property so that everything is “wired up”.

Working with the delegation pattern in practice usually involves interacting with the protocol from the delegate end of things. Most of the time, we’re working with Apple’s APIs (such as a UITableView or just about any other UI control they provide). We typically only require knowledge of the protocol’s definition so that the class we choose as our delegate can implement the right functions.

There may be some situations where you may decide to follow Apple’s lead and use the delegation design pattern for your own code. Maybe you’re making a special UIView subclass or a special picker control (much like UIImagePickerController). Or maybe you’re into game development and would like to communicate from your SKScene back to the View Controller. These are just a few that came to mind, but they all present possibilities for utilizing the delegation strategy.

To give a simple example, suppose that we’ve decided to create a class to encapsulate all of the logic for a special rating picker control. We’d like to offer the ability to customize the picker some by allowing the user of our control to specify a preferred rating symbol. We’d also like to provide a feedback loop to notify the user of our control when certain events have occurred. Delegation is a great tool to provide both customization options and communication between classes. What would this example look like in code?

Notice how this protocol definition allows both the customization point and the feedback loop we were hoping for. It’s always nice for the delegate to have access to the public API of the instance calling its methods, so the RatingPicker (or UITableView or UIScrollView or whatever) is often passed along as an argument.

With the protocol defined, our RatingPicker (the delegator in this case) can now set itself up to use that protocol:

The delegate property is strongly typed to be a RatingPickerDelegate.

Since it’s optional here in this implementation, the delegate is not absolutely essential for the RatingPicker to work. If it were essential, we’d parameterize init and assign it during initialization.

Once the terminology of delegation is unpacked, understanding how it works is the next logical step for grasping the design pattern as a whole. Here we explored all the players involved in the strategy and related protocols, which are integral to the strategy, to some real-world analogies. Finally, we took a look at how delegation works in practice, and demonstrated each role in delegation with code.