In a previous post about fade animations in Swift, I demonstrated how to use a class extension to add the ability for any UIView instance to easily call fadeIn() or fadeOut() on itself. This strategy was nice – the animations, while simple, would have cluttered my code each time I used them, had I not encapsulated them somewhere. Employing class extensions in Swift seemed a natural way to provide this functionality to UIViews.

Well, I liked the idea so much that when it came time for me to implement a slide animation, I kept the same strategy, and I’d like to share my implementation with you today.

To start off with, here’s a sample of what the animation does:

The easiest way to get the gist of what I’ve done is to head over to GitHub and download the example Xcode Project. In real life, I’ve combined the fade animations and the slide animation into the same UIView extension, but for education’s sake, I’ve split them out so you can easily see the moving parts.

There are three major parts to this example implementation, which I’ll explain in detail shortly. Here’s the overview:

2 – Set up the storyboard

In my example, I wired the trigger up to a button’s touchUpInside action. For you, it may be something different that triggers the animation to begin. Whatever it may be, call slideInFromLeft() on your UIView instance (in my case, the UILabel).

Notice that directly after the call to slideInFromLeft(), I change the label’s text property to contain the new text that I want to slide in.

The real work all happens inside the UIViewExtensions.swift file where I add the slideInFromLeft() function to a UIView’s arsenal.`

First to note is that I’ve provided a few default values in the function’s signature so that the animation can be initiated as simply as writing viewInstance.slideInFromLeft(), or as “complicated” as providing argument values to both duration and completionDelegate:

Next, I create a CATransition instance, and set its delegate property if a completionDelegate is passed when the function is called:

To keep things simple, I only allow myself to customize the duration property, and optionally provide a completionDelegate when I call the function… the other properties are more fundamental to how the animation should perform, so I encapsulate the implementation here so that it’s an abstraction when I actually call slideInFromLeft() later in my View Controller.

The last thing I do is add the animation that I just created and configured to the view’s layer property. “The view” here would be the instance of UIView that has calls slideInFromLeft():

This is probably the more challenging piece, just because it takes some tweaking to get the auto layout constraints just right. 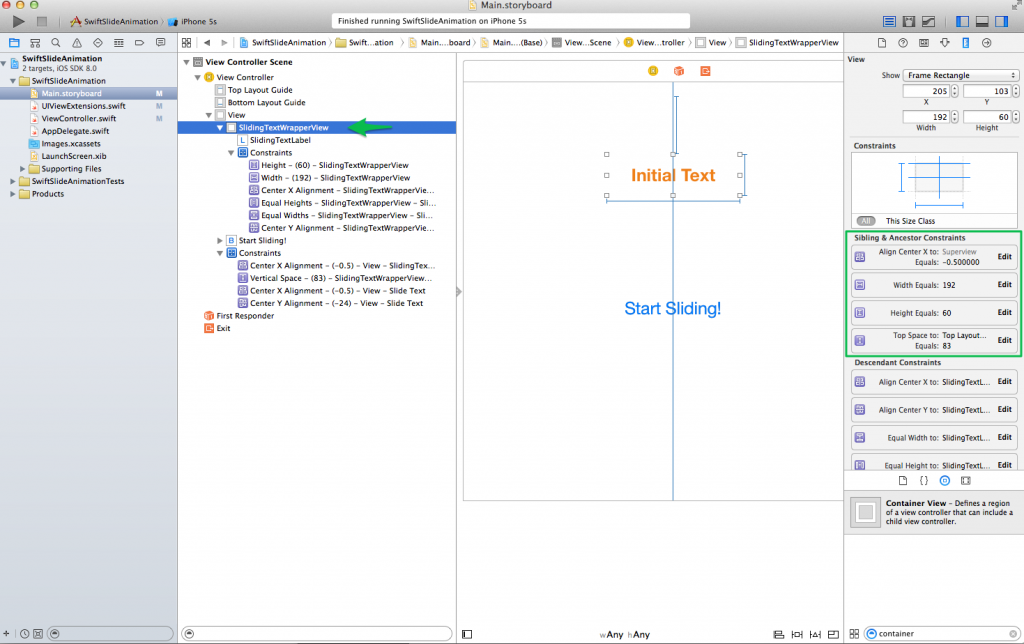 Next, I made sure that my label that will be sliding is inside the wrapper view. I set its constraints to 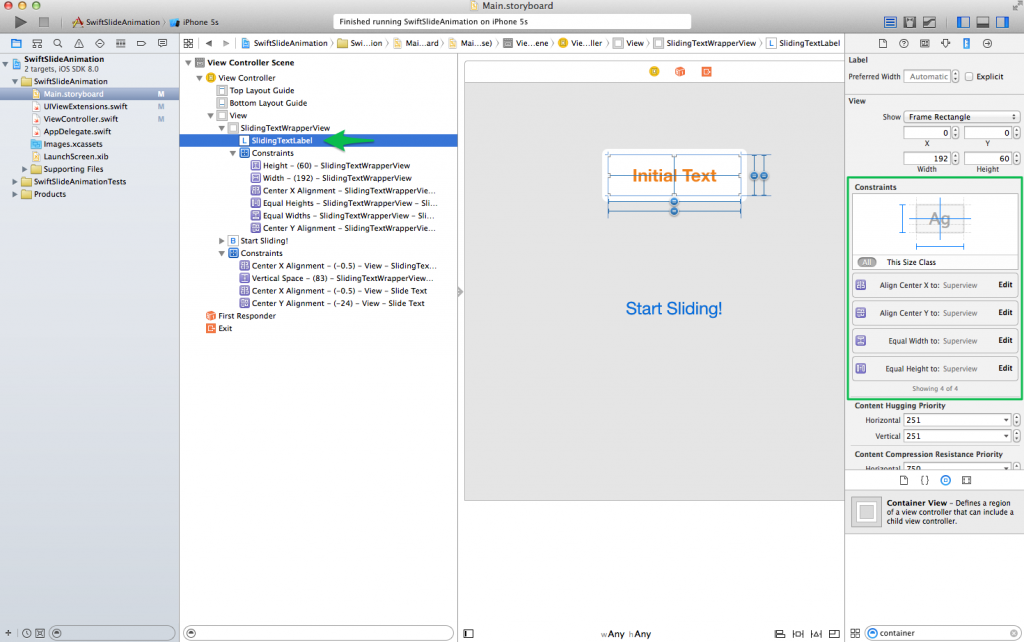 The last thing I do in the storyboard before wiring things in the View Controller is to select the wrapper view and make sure it’s Clip Subviews property is checked. As an experiment, toggle this option and watch the effect it has on the animation’s appearance: 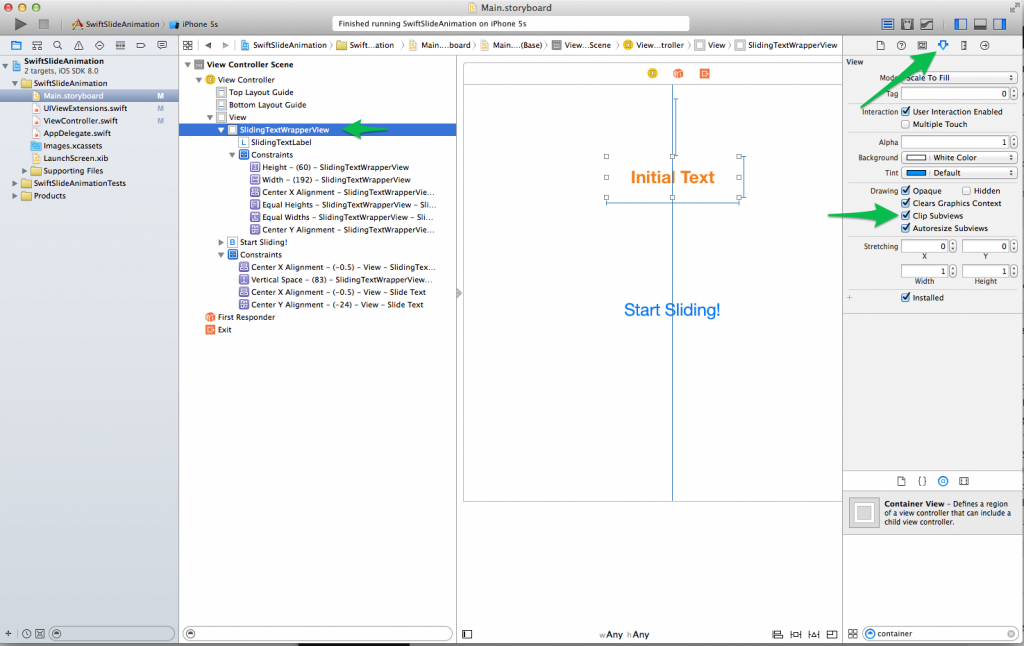 The final piece of the setup is to wire things up to the View Controller and animate the Label.

Since I needed to reference the Label containing the text that I’d like to animate, I created an IBOutlet from my storyboard to my View Controller:

Next, I needed a way to initiate the slide in animation – I decided that wiring it to a button’s touchUpInside action would be sufficient for the example, so I created an IBAction from my Storyboard to my View Controller for that purpose.

Within the body of that IBAction, I wrote the call to slideInFromLeft() on my slidingTextLabel instance:

If you have need to specify a duration or a completionDelegate, there’s a commented out line of code there that shows an example of passing those arguments to the slideInFromLeft() function.

If you specify a completionDelegate to the slideInFromLeft() function, a method called animationDidStop() will be called when the animation finishes. Inside this callback function, you can write code to perform any action you’d like to have happen after the animation has finished. If you don’t set a completionDelegate, there’s no need to have this method override in your code:

That’s a wrap, folks! Hope this strategy is helpful for you as you think about where to place code for your UIView animations.