Below are steps that I’ve taken, myself, to deploy the Parse Dashboard to a cloud host, such as Azure, or Heroku.

Before you worry with a cloud host, you need a copy of the parse-dashboard to prepare for deployment…

First, you’ll want to clone (or fork, then clone) the parse-dashboard git repository from GitHub.

Once the directory for your parse dashboard is created, run the following command.
git clone https://github.com/ParsePlatform/parse-dashboard.git

Once the repository has been cloned to your local machine, change directory (cd) into the ‘parse-dashboard’ directory. You can run ls at the Terminal to list out the contents of the directory you just cloned the dashboard repository into and you should see a new directory named ‘parse-dashboard’. That’s the one you need to be inside next.

So, in the ‘parse-dashboard’ folder, run npm install at the Terminal. It could take a minute or three for the installation of all the Node packages to complete.

You can run ls inside ‘Parse-Dashboard’ and should see parse-dashboard-config.json in there. If you don’t, you’re probably not in the right directory. At this point, you could actually be in Finder to locate the file if you’re more comfortable there. Just run open ., and you’ll be in a Finder window at the directory you’re in inside the Terminal. Then you can just double-click the configuration file to open it up in a text editor.

Once you have it open, you need to have a few pieces of information about your self-hosted Parse server handy:

Adjust your Parse Dashboard’s configuration file as follows with the values you’ve gathered:

5 – Stage and commit all changes

Stage all of the changes you’ve made to the parse-dashboard-config.json and the .gitignore files, and add the files and directories that were previously ignored by git by running git add -A

Since you’re storing values that are intended to be kept secret (such as your app’s Master Key), you need to set up a private git repository that can be used for two purposes: 1) To keep your configuration under source control and 2) to be able to use as a deployment source for your cloud host provider.

The idea is that you can wire up your cloud app in Azure/Heroku/AWS/wherever to refresh itself every time you commit code to the master branch of this private repository. It’s really handy for making updates.

Bitbucket offers its members unlimited private repositories, so that’s where I’ve chosen to host mine.

With the new private repository set up, you need to add it as a remote to your local parse-dashboard repo.

In the Terminal, make sure you’re in the directory of your local parse-dashboard git repository and run:

9 – Create app on the cloud host

Now you need to create a new app in your hosting provider of choice. I typically go with Azure, because I’m most familiar with it. I also like that they offer a completely free option, though if you want to really run this stuff for a larger-scale “production” or “enterprise” app, it’s going to cost no matter where you choose to host it.

The cloud host may want to know what flavor of app you want to create. In the case of parse-dashboard, it’s a Node.JS app.

Once you’ve created a new Node app on your cloud host of choice, you need to configure it for git deployment.

This step will be different for each cloud host, but the general idea is that you should be able to configure your private git repository that you set up in Step 5, to be the source from which the cloud host will go out, grab the code, and perform the necessary steps to get the Parse Dashboard bootstrapped for access.

In Azure, you simply click on your app, and configure git deployment in the Deployment Source settings: 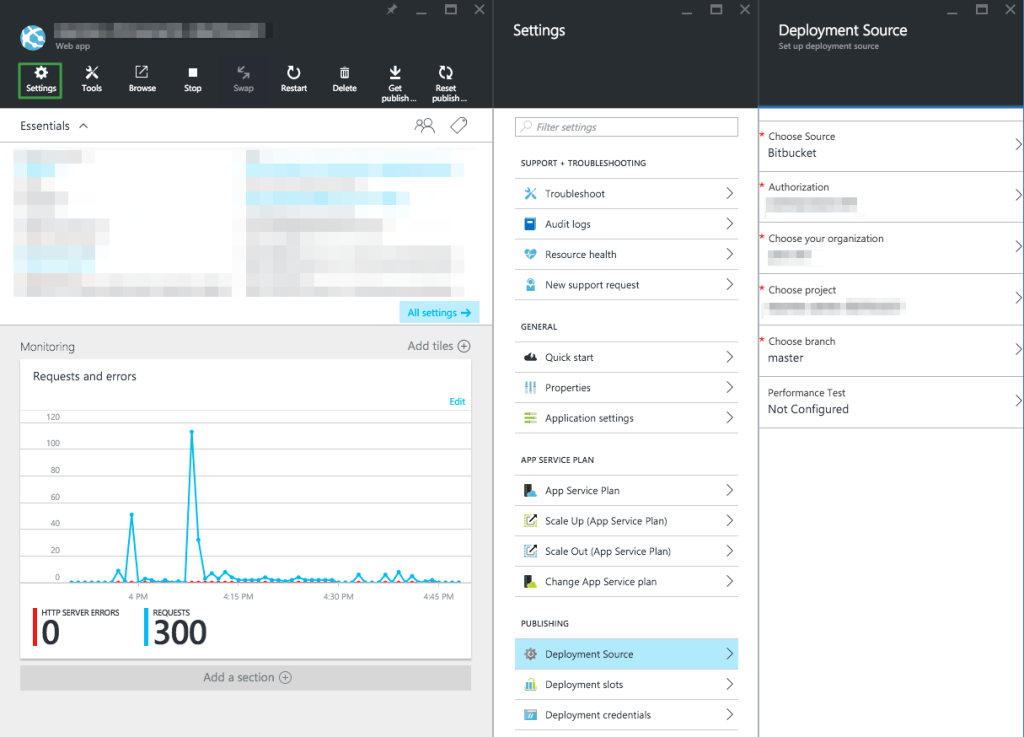 You might check out Heroku’s startup guide for help on deploying to their service.

Note that instead of doing the git deployment option, you could always FTP your whole parse-dashboard directory (the one that you cloned and ran npm install inside), if your cloud host supports this deployment option.

If you access your app after you’ve deployed it to your chosen cloud host, you’ll likely run into an error page stating that “Parse Dashboard can only be remotely accessed via HTTPS”.

Configuring SSL is beyond the scope of this walk-through, but that would be the next step if you chose to do it for your production app. Note that on Azure, your App Service Plan needs to be at “Basic” or above. Heroku charges a monthly fee to set up an SSL endpoint as well.

If you choose not to afford it or if you just want to test things out in the deployed environment to see if it’s working or not, you can set up an environment variable in your app’s settings on the cloud host.

In Azure, you need to choose your app, then go to “Application Settings” in the Azure Portal. Then add a new key-value pair under App settings: PARSE_DASHBOARD_ALLOW_INSECURE_HTTP is the key, and 1 (the number 1) is the value: 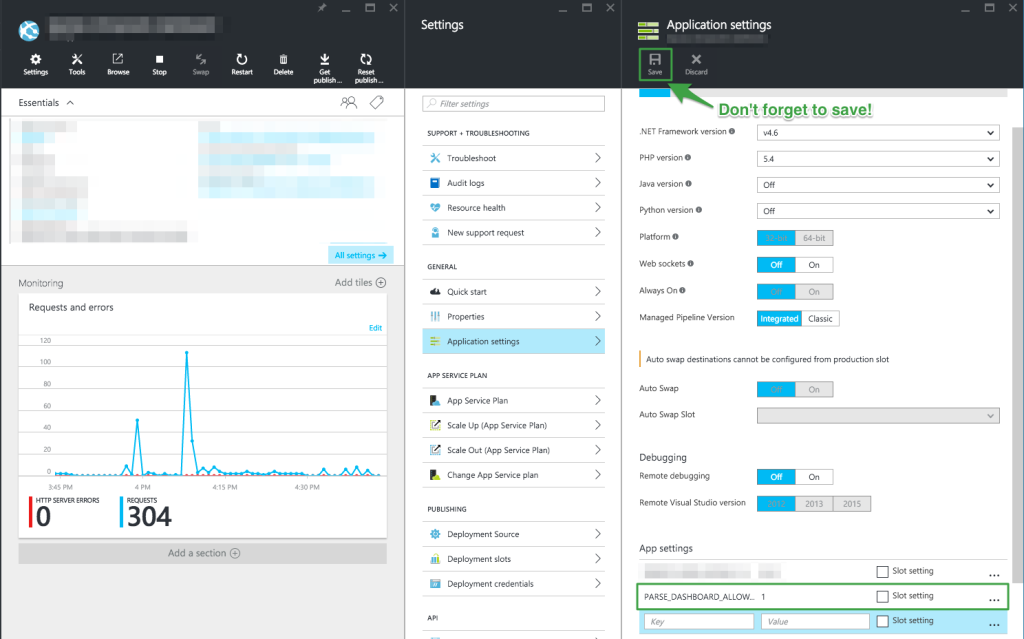 In Heroku, you need to go to your app’s Settings, and then add a new Config Var with the same key-value pair: