How often do we take an initial cursory look at some documentation, shake our heads and say, “Ok, sure! Got it!”, and then some time later get to the actual usage of that perceived understanding only to find out, “Woah – this is behaving differently than I expected! I wonder if the documentation says anything about this?!”

A few discussions I’ve had recently have prompted me to question what I thought I knew about Swift extensions. I have read documentation about extensions and I thought I understood them pretty thoroughly. However, these conversations, along with some experimentation done on my own revealed a few nuances that I didn’t pick up on before.

Update: Almost immediately after publishing this article, the Swift community chimed in and helped me figure out my fundamental hiccup which prompted the aforementioned experimentation in the first place. I’ve written a follow-up article called “Clarifying Swift Access Control”, describing that misunderstanding. I recommend giving that one a read to avoid making the same mistake I did!

In particular, the following three nuances challenged what I thought I knew about Swift extensions:

Before I begin, suppose that I have a public struct called Person. It has some private properties, name, gender, and age. An enum encapsulates the idea of Gender. The struct looks something like this:

Now, suppose that I wanted to extend Person and inspect the three nuances about the extension’s capabilities and behaviors that I introduced at the beginning of this article…

Extensions and visibility into extended Type

When I introduced that first nuance about visibility into the extended Type, I asked the question, “Can they see things marked private?” The answer surprised me at first: Yes…they can.

However, here’s where the second nuance comes in: It absolutely does matter where the extension is defined.

Extensions defined within the same file as the Type they’re extending have access to private members of that Type.

For example, defining an extension to Person within Person.swift allows the extension to access private properties and functions! Who knew?!

My reasoning as to why extensions defined within the same file behave this way is because when it comes down to it, I could have just written the extension’s implementation as part of the Type itself and it would have had the same effect.

I’m in the source file of the Type I’m “extending”. So whether I write the additional functionality as an extension for the Type, or just define what would have been in the extension inside the Type, itself, the net effect is the same.

Therefore, the compiler essentially says, “I see this extension being defined, but there’s really no point. It’s in the same file that the Type is defined in… so the developer could have just written all this code within the Type itself… so I’ll let him/her refer to private code blocks.”

Update: My reasoning above reveals that I truly didn’t have an understanding of Swift access control. I recommend giving my followup article titled “Clarifying Swift Access Control” a read for more details!

Defined in a separate file

Moving the extension definition into a separate file, however, causes the extension to lose that visibility into the Type it’s extending.

Following the inverse of my previous reasoning about private visibility when the extension is defined within the same file, this behavior actually makes sense to me.

Most of the time, you’d be writing an extension for Types that you don’t have the source to. In that scenario, extensions would have the same visibility that any client of the Type’s exposed API would have, namely, the things marked public.

The final nuance also yielded some semi-surprising results for me. Apple’s documentation says it, but until I experimented and saw it in action, I didn’t catch the nuance around the default access control modifiers applied to extensions.

In short, when you declare an extension but specify no explicit access modifiers (ie, you just use the default), the extension’s default access level depends on the access level of the Type it’s extending.

Here’s what the extension looks like if we analyze it from the perspective of using no explicitly declared access modifiers (note that to gain access to private properties and functions, I’m declaring the extension within Person.swift):

Using the default access modifiers as shown in the code snippet above exposes access to the extension’s new API to instances within the same module. However, it does not expose additional public API for the Type it’s extending to a client of that Type that’s in another module (for example, the unit test target, which is another Swift module). 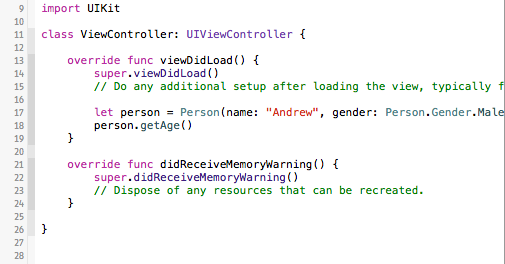 For some reason, I had it in my head that if a Type that I’m extending is public, the extension’s members would default to public. I don’t know why I thought that, but thankfully my experimentation cleared up!

Adding public access control modifiers to the extension implementation’s members makes those members visible everywhere (that is, both within the same module, and within the test target). 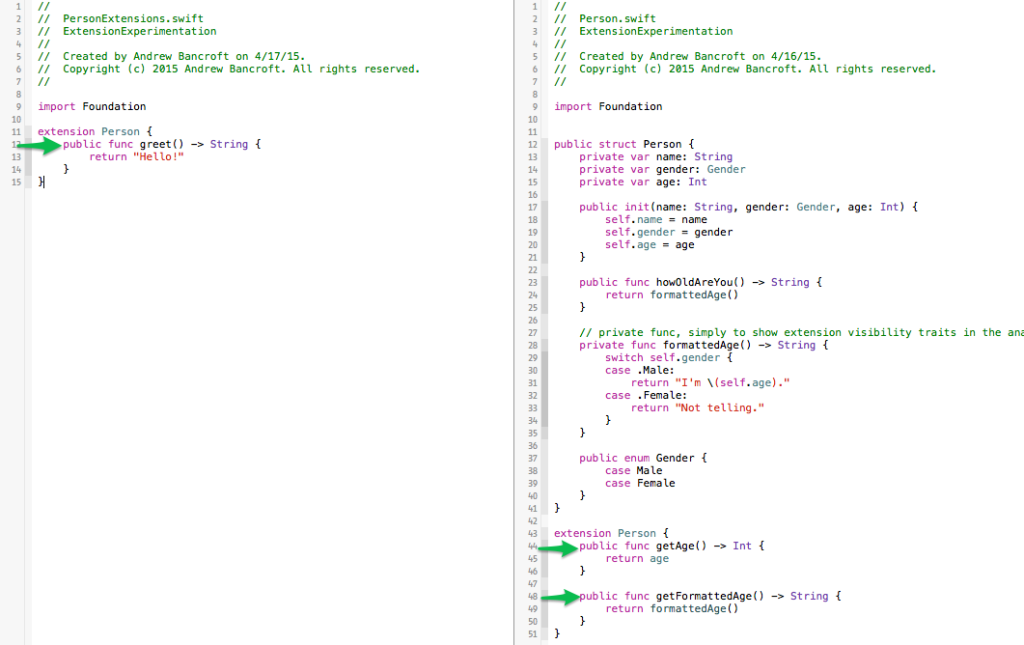 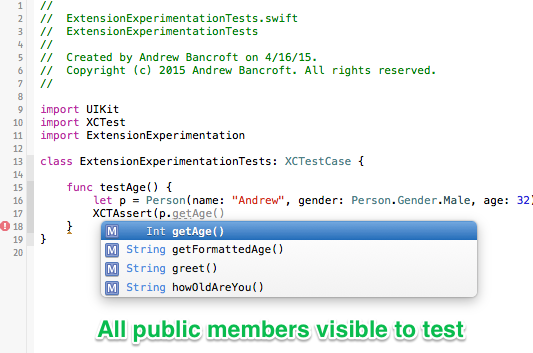 But notice that on the line where I’ve written extension Person { ... } that I haven’t specified an access control modifier for the extension, itself. I’ve only added public to its members. Even still, the new functions are visible to the test target which is a different module.

In other words, there’s no need to write public extension Person { ... }. Since Person is public, the extension just uses the Type’s access level for its own declaration.

The three nuances about Swift extensions that were analyzed here were “surprising” enough to me to warrant some experimentation. My hope is that the analysis that was done will help clear up these subtleties for others who are struggling with understanding how Swift extensions behave!